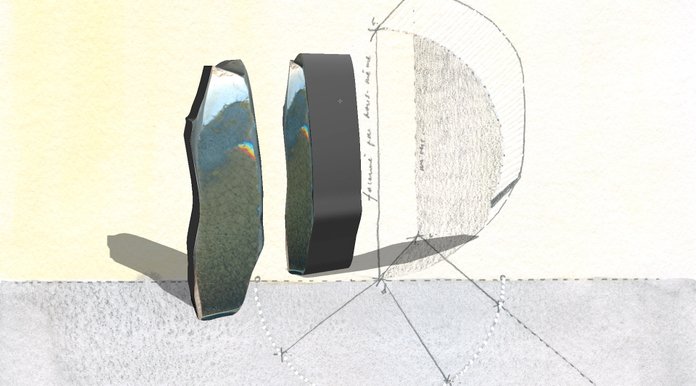 Early 2018, Mira Sanders created Théorie des Objets—a series of inkjet prints and drawings that translate her observations of objects, based on the book Théorie des Objets (1972) by Abraham A. Moles. In the same period, upon the invitation to participate in the current exhibition, Sanders searched the Forgotten Heritage database and there discovered Ludmiła Popiel’s Found Objects Set 1 (1974)—a work she felt related to. Found Objects Set 1, as we can read in the database, is a photographic “record of an exploration of a certain territory (the city of Rome), pursued on the basis of objects accidentally found in the streets.” The set consists of close-ups of the found objects, put next to a measuring tape as if it were an archeological artifact. As a response to this work, Sanders had imposed upon herself to, between January and May 2018, collect objects on the way, for example during her walks between work and home. Just like in the work of Popiel, the objects had to be “precious” and pocket-sized. Also similar to Popiel, Sanders photographed the collected objects, scanned them, and then subjected them to all kinds of measurements and observations—again (as in the prints Théorie des Objets) trying to understand and explore Moles’ theory. Eventually, the film Objets Perdus Trouvés shows the scanned objects, being measured, rotated, doubled, etc. in the grid structure of a 3D computer program and/or in a drawing made by the artist, all together forming multiple layers. While a male and female computer voice alternately describe the object by dryly summing up its measurements, material, form, colors, and supposed function, we can follow the artist’s manipulations of the object, thoughtfully rotating and displacing it in its new surroundings. This work, full of traces, is a poetic invitation to look more closely at the world surrounding us.